How Macro Influencers can promote your business

When popular Ugandan Journalist, presidential adviser and CEO of the independent magazine Andrew Mwenda drove the Kiira EV into  Uganda’s capital in January earlier this year. It created a big buzz on social media. This act prompted a number of Ugandan corporates to make inquiries on how they could order for their own model of the Ugandan manufactured Electric car. The event had a big influence in the mindset of very many Ugandan drivers and car owners, that driving a Ugandan made car was a prestigious and unique sentiment making one a proud Ugandan and proud owner of an African manufactured automobile. That event demonstrated the emerging impact of influencer marketing in Uganda and a significant glimpse of the power of successful macro influencer marketing campaign. 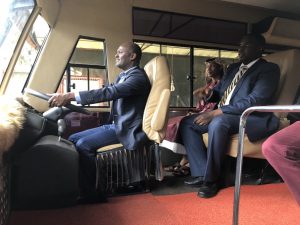 The influencer marketing in the digital space has been an emerging trend in the African market and there has been a huge spike in its utilization and optimization from 2017, throughout 2018. The year 2019 seems to be another record year for digital influencers in the East African region since many brands have now taken up the mantle of hiring influencers to boost their advertising online and through social media. A lot has been said about influencer marketing with its limitless engagement peaks and viral potential in the social media space. There have been a number of influencers come up within a short period of time due to the influencer buzz and craze.

A lot of research and emphasis is now being put into influencer marketing. There are two major categories of influencers that emerged in the second decade of the 21st century after the successful social media boom. Namely Macro and Micro-Influencers. In this article, we’ll dwell on digital Macro influencers and how to harness their superpowers to drive sales, run campaigns and promote brands.

Who Are Macro Influencers?

Macro influencers are celebrity influencers whose audience on different social media platforms ranges from 50,000 to million followers and upwards.

Micro-Influencers are usually highly niched influencers who have a passion for a specific kind of content and followers sharing the same interests.

Micro-influencers follower numbers range from 2000 to about 50,000 followers on different social media platforms. Micro-influencers are more relatable to the public compared to macro-celebrity-influencers since their advertising is more based on peer to peer marketing, and peer influence since they are individuals who are normal people that the public can easily relate with and understand. Their opinions look more honest and genuine in their social media community.

Brands today are now leveraging social media influencers on different social media platforms such as Twitter,  Instagram, facebook and youtube to impactfully drive their message, products, and services in order to reach millions of Ugandans who are online daily, weekly and monthly.

Brands typically partner with macro-influencers for their reach, visibility, and shareability.

They have an ability to engage and market brands on an impactful scale to the masses. This makes their contribution to the market very valuable and a powerful tool for brands, organizations and different stakeholders to thrive on the different advertising channels they dominate.

Benefits Of Working With  Macro Influencers

The extensive reach that macro-influencer celebrities have on their social media platforms gives brands a huge boost in the visibility of their campaigns. Macro-influencers following cuts across a broad and diverse audience, this enables brands to get a wide variety of consumers to view their message because of the viral influence macro-celebrity influencers have.

Hiring a number of brand influencers to market your business can be a tedious task that requires time to search and match influencers for a marketing campaign. This is normally the case when it comes to hiring Micro-influencers since they are relatively less known by the public and they most probably have a particular niche of content that is meant for a specific set of viewers. Macro-influencers would usually be the best option to grow your brand reach within the shortest possible period of time because of the pedigree and high following they have in society.

There are fewer risks involved in partnering with a macro influencer to grow your brand since most of them hire professional social media executives to manage their social media engagement and activities. Macro influencers have an authentic organic fan base due to their celebrity status. This makes their statistics more believable than Micro-influencers who are relatively unknown. A lot of micro-influencers that have a fan base of 10,000 to 50,000 followers have been accused of having fake follower number due to the rise in the use of a number of fake third party applications that the influencer market has been plagued with, where individuals have the opportunity to illegally buy fake followers and fake likes.

Macro influencers bring a lot of years of experience to the table. They have a lot of experience working with marketing brands, companies, and organizations to produce sponsored content. This makes macro-influencers more professionally suited to marketing since they have already established a big name and brand that the public and social media users can easily relate with. Smaller influencers have less experience and are usually just starting out which makes it a bit more difficult for a brand to thrive on their work when it comes to generating professional high quality sponsored content.

Macro influencers are undoubtedly valuable assets to your brand and can drive reach and engagement in high volumes, as well as sales, social media growth, and brand awareness.